How appropriately inappropriate the following child’s tune is in Judge John Jude’s Court. 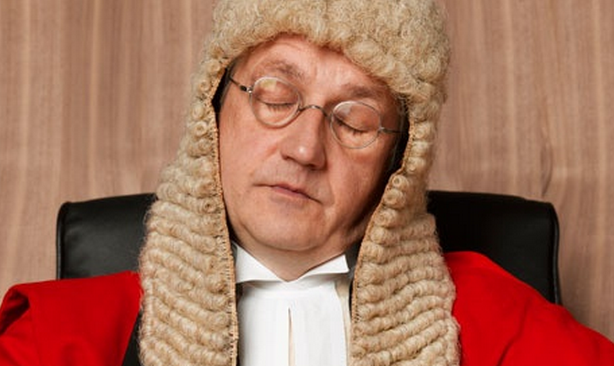 It is a sad day in Racine’s court that the arguing Attorneys have to inform the Judge of what case is before the court.

The Judge was confused and clueless as to what case was standing before it, and had to be informed by attending legal counsel of the case before the court.

It appears Judge John Jude’s Court is a dysfunctional court operating in the Racine Circuit Court System. How can a court properly proceed in a motion hearing if the Judge has not prepared for the hearing, nor had not reviewed the file of the previous legal proceedings?

The hearing request was for a reduction of bail for Mr. Hanson. During the hearing, the court granted a reduced bail amount with additional conditions and responsibilities. These conditions set forth by the court placed full responsibility of compliance of the court’s terms on Mr. Hanson's sister.   Mr Hanson decided not to accept the reduced bail amount, perhaps fearing the additional court’s burdens on his sister would place her in dire straits.

Disorder in the Court

Judge John Jude also has another problem in his court,
the importance of veracity.

Veracity in this court appears to be of no relevance to the Judge, or the other legal parties involved in this case.

The District Attorney’s Office was made aware of the defective complaint in November of 2014, and has also not taken action to inform the court of the known lies before the court.

The court has been made aware of the defective complaint directly by RCC, and the Judge has not acted to demand veracity in its own court.

Quoting another blogging site,
Racine Exposed;
https://racineexposed.wordpress.com/
“The rule of law is dead in Racine County”

There are 5 legal entities that have not made any effort to correct the defective complaint, including the court.

Judge John Jude has taken no action to address veracity before his own court. It appears Judge John Jude along with the 4 other legal parties has violated their oaths of office and should be held accountable for such acts.

Even Mr. Hanson’s Defense Attorney Dirk Jensen did not bring up the issues of the defective complaint, or of veracity in the court during the motion hearing.

In the interim, Mr Hanson continues to remain in custody in the Racine County Jail, awaiting his trial.

Is Defense Attorney Dirk Jensen’s inaction of addressing the known defective complaint a brilliant legal ploy? complicity? or perhaps a reflection of his lack of work ethic?

Time will soon tell of Dirk Jensen's efforts as Mr. Hanson’s trial date looms in the very near future.
Posted by legal stranger at 11:44 AM